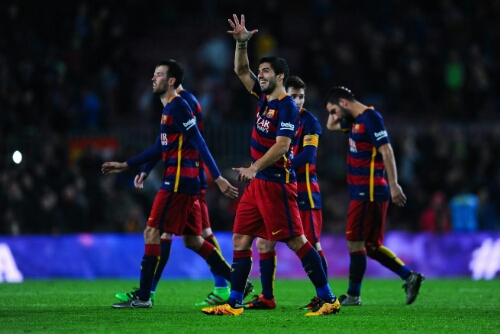 FC Barcelona will be looking to return to winning ways today when they return to the safety of the Camp Nou to resume their faltering La Liga title defense against Valencia CF. The visitors are onto their third coach of the season, former assistant
manager, Pako Ayestaran, and after he led Los Che to their first La Liga victory in a month last weekend against Sevilla CF, they will be hoping to extend the Blaugrana’s recent slump. After all, there can be no doubting that the main plotline entering this match is Barcelona’s form, and how they respond to their midweek UEFA Champions
League elimination at the hands of Atletico Madrid.
The loss at the Vicente Calderon represented Barcelona’s third loss in the past four matches, and the fourth time in their past five that they had failed to win.
In the aftermath of that defeat, we’ve seen various pundits and “experts” adding fuel to the fire; some critical of Luis Enrique , some critical of the players and some even critical of Lionel Messi. While the precise topic of their editorials has differed, the general theme has been consistent – that Barcelona are on the ropes, and that Barcelona are in crisis.
How will they regroup and defeat Valencia if they are in such blatant disarray? I mean, it’s not like we’re in the final of the Copa del Rey and at the top of La Liga – because the situation truly is dire isn’t it? As per usual, there’s been a generous dose of sensationalism applied to all the post-Atleti reports with few focusing on what was actually evident from that game. By no means would I consider myself anexpert, but from my vantage point in the Vicente
Calderón, I clearly witnessed a very different match from some of the other Culés and journalists. The key takeaway from that match and indeed that tie as a whole wasn’t Barcelona’s exit – rather it was Atletico’s success, the gameplan constructed by their
manager and the execution from the players. There is no side on this planet with a better record against Diego Simeone’s Atletico Madrid than Luis Enrique’s
FC Barcelona – but even so, on this particular night in Madrid, there was to be no denying the hosts. They fought for every loose ball as if their life depended on it; they threw themselves at even the slightest hint of danger and offensively, they played
with a concentration and focus that few teams could match. Given the troubles they had against SL Benfica, would you have really favoured Bayern Munich to have performed any better across those two particular matches? Likewise, would Real Madrid or Manchester City have been seen as favourites across that quarter-final?

LAST MEETING
Valencia CF 1-1 FC Barcelona – 10 February 2016–Copa del Rey After a crushing defeat in the first-leg, it looked like Valencia might exact some revenge in the return at the Mestalla, but a late equaliser from Wilfrid
Kaptoum ensured Barcelona’s unbeaten streak survived another week.

MATCH PREDICTION
Look for us to bounce back from the Atleti
disappointment with a vengeance. 3-1 to the home team.